Residential and large commercial facilities that have high process loads also have heating and cooling requirements that are critical to the day-to-day operations of their business. These facilities require both thermal energy and electricity, which have traditionally been produced in two separate processes. With Combined Heat and Power (CHP) technology, also known as co-generation, energy and electricity can be produced as a single process and can use energy twice as efficiently as a traditional energy delivery model.

CHP is when waste heat is captured during electricity production and utilized as thermal energy. This use of an otherwise wasted resource results in increased efficiency, significant energy cost savings and increased reliability. In addition, the higher fuel efficiency will result in lower emissions per unit of power produced compared to traditional electrical and steam generating units. 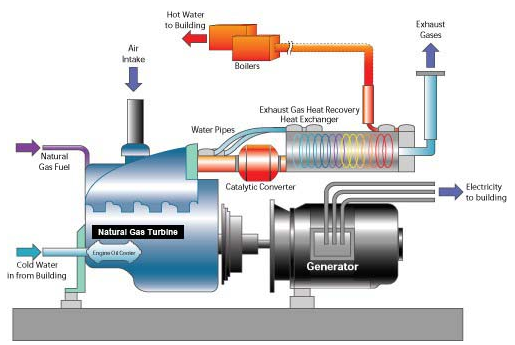 Cogeneration works hand in hand with submetering. As co-generation has continued to take a foot hold in the energy industry, it has become apparent from the co-generation manufacturers that they required larger energy sources to service with the generator, and began to master meter and submeter properties. Bay City Metering has worked in partnership with the generator companies to build a system that provides the Building with what it needs to make the co-generation system economic. Our understanding of rates, electric and gas give us a unique insight as to when and why co-generation systems make sense.

Let’s discuss the co-generation specifications for your property. Call our office at (212) 575-0785, or send us an email using the form on this page. We look forward to speaking with you soon.